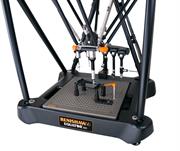 Manufacturers using the Renishaw Equator™ flexible gauge now have even more options for inspecting parts right where they are being made – on the shop floor, in the toughest of conditions. With the new TP20 touch trigger probe kit, Feature Compare and updated EZ-IO software, flexible gauging is now ultra-fast, simpler to setup and easier to automate.

Manufacturers recognise the benefits of Equator's combination of flexibility, fast scanning, low purchase price, and low cost of ownership (Equator requires no regular re-calibration). These benefits, when combined with the system's unique ability to compensate for the effects of challenging environmental conditions, make it the gauge of choice in any industry.

Short cycle times for all applications

The ultra-fast TP20 touch trigger probe can now be combined on Equator with the high speed scanning of the SP25 scanning probe.
TP20 can be used for fast capture of discrete point data, with the stiff lightweight structure of Equator allowing very short cycle times and high repeatability on simple touch point measurements. The touch trigger kit includes robust industry-standard TP20 modules and a new range of extension bars and joints.

The system can also automatically switch to the SP25 scanning module using the integrated changing rack to provide any combination of measurement routines. SP25 allows continuous scanning of features at scan speeds of up to 200 mm/s, to gather high volumes of data when, for example, information on the form of features is required.
Equator with TP20 is an ideal alternative for in-line gauging tasks which might have used custom hard gauging systems with single-point air gauges or LVDTs. The advantage of flexible gauging with Equator is that part geometry can be computed simply by taking additional data points, rather than the need for a complex custom gauge.

Equator uses the principle of mastering to cope with changes in temperature on the shop floor. Now the process of calibrating the master part is made very easy with the new Feature Compare function.

Master parts do not need to be expensive or custom made; users can simply take a production part and measure it. The master part could be measured in a number of ways, including on a calibrated co-ordinate measuring machine (CMM) in a temperature-controlled environment. This measurement establishes the variation of the master part from CAD or drawing nominals.

With Feature Compare the user can simply take the master part measurement data and enter the compensation values for each feature's size, position or orientation. The simple and unique Feature Compare interface has been designed for effortless data input.

EZ-IO software makes it very easy for integrators setting up automated manufacturing cells to configure communications between Equator systems and the cell controller. This allows intelligent functions such as automatic re-mastering: using a robot or shuttle system to load the master part when Equator detects that the shop floor temperature has changed.
The Process Monitor display is now built into EZ-IO. Process Monitor provides a chart showing the history of feature measurements, and an easy graphical view of proportion of tolerance for each feature. It also enables management of the mastering process according to temperature, time or number of parts measured. Being able to view the inspection data history of a part is an invaluable function for controlling manufacturing processes.

Since the launch of the Equator gauging system in 2011 many customers have also taken advantage of the turnkey programming service offered by Renishaw and its partners. Using MODUS™ software, experienced engineers work closely with a customer to generate programs that allow a wide range of parts to be gauged on Equator systems.

Reflecting the international nature of many modern manufacturing organisations, Equator customers have been able to take advantage of Renishaw's extensive network of Equator support engineers. Projects initiated in one country or region can be easily transferred and locally supported in multiple locations. Renishaw now has over 70 regional support offices and multiple approved partners, covering every industrialised area of the world.

Equator is a radical alternative to traditional dedicated gauging, filling a gap in the market never before addressed. The patented low-cost design, unique in construction and method of operation, is capable of high-speed comparative gauging for inspection of high-volume manufactured parts. Equator is a lightweight, fast and highly repeatable gauge that operators can use with ‘push-button' simplicity. Equator can switch between parts in seconds, perfect for flexible manufacturing processes or accepting parts from multiple machines.

Re-mastering immediately compensates for any change in the thermal conditions of a shop-floor environment, and is as swift as measuring a production part. Equator can be used in factories with wide temperature variation – simply re-master and the system is ‘re-zeroed', ready for repeatable comparison to the master.

Effectively, the calibrated absolute accuracy of the CMM or other devices (often located in remote temperature controlled rooms to ensure accuracy) can be ‘extended' onto the shop floor to provide calibrated traceability to Equator measurements. With the calibration data for the master part loaded into the Equator software, measurements made on the Equator system can be referred back to the CAD or drawing nominals.

Equator programs can be created or modified using Renishaw's proven and comprehensive MODUS programming software. Shop-floor staff then simply select and run programs using the intuitive Organiser operator front-end software, requiring little or no training. The Organiser software can report gauging results either as a simple ‘pass' or ‘fail' message, as a full inspection report, or through the Process Monitor window.

Compared to dedicated gauging, Equator cuts fixture costs considerably. By using fixturing that positions parts to within 1 mm of where the master was measured, there is no significant effect on inspection results and the need for expensive precision fixtures is removed.
In seconds, users can load parts that are still attached to the fixtures used during machining operations. The Equator fixture plate can be easily exchanged for other plates, each mounted to the Equator base using highly repeatable three-point kinematic seats. The plates can also be exchanged for fixture plate spacers, allowing smaller parts on their own fixture plates to be gauged in the same measuring volume.

Equator is unique in its design and method of operation, and has already changed the thinking of thousands of production engineers, making it their new gauge of choice. The versatility and repeatability Equator offers is re-defining the world of gauging, and these new product options further strengthen its benefits to manufacturers globally.

All images and text copyright Renishaw